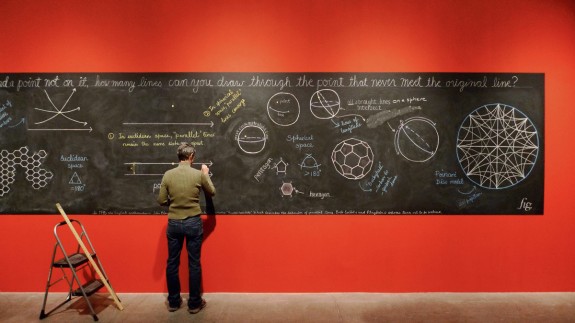 Margaret Wertheim drawing in the Mathematical Chapel of the Reefs, Rubbish and Reason exhibition
at the Alyce do Roulet Williamson Gallery, Art Center College of Design, 2011. 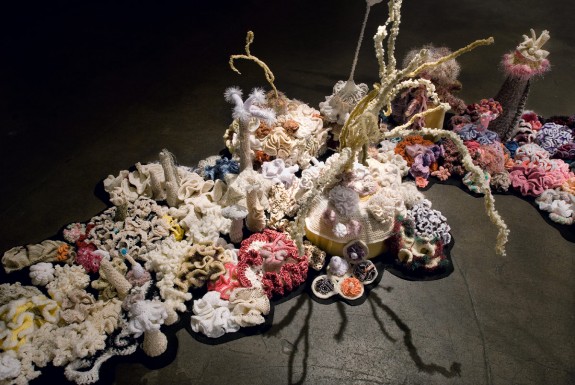 MW: We decided to create a bleached reef, because coral bleaching is a sign that corals are stressed and sick. Corals are a very sensitive organism, and when they get stressed by environmental disturbances such as pollution or warming of the ocean, what happens is they expel the symbiotic organisms living within them, and it’s those symbiotic organisms that actually give corals a lot of their colors. What happens is that they immediately lose a lot of a color and look bleached, and if the environmental conditions return to being good, the microorganisms come back, and the corals return to full color. But if they don’t come back, the corals literally starve to death and become bleached white.

We thought this was a very poetic way of drawing attention to the problem of reefs, so we’ve actually made two bleached reefs. One is called the Bleached Reef and one is the Bleached Bone Reef, which represent the two stages of coral bleaching, one when the coral is sick and the other when the coral actually died. The irony of this is that actually those two reefs are some of our most elegant and beautiful and most popular reefs, because they are very beautiful objects, but they are meant to be calling attention to a very serious problem.